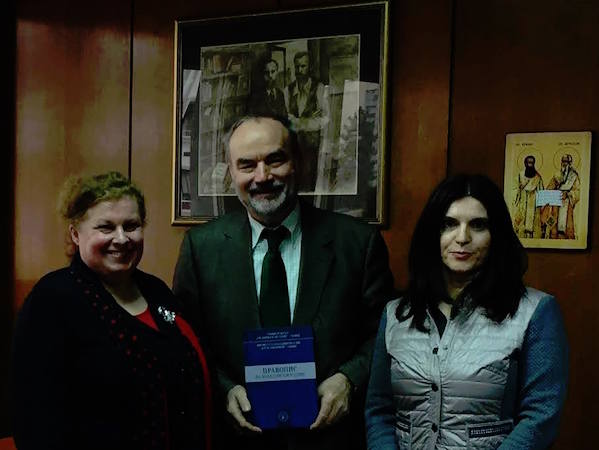 The founder of the Intellectual Property Agency Berin, prof. Dr. Gjorgji Filipov visited the Institute for Macedonian Language "Krste Misirkov" as well as the Institute of Macedonian Literature. At the meetings with the Directors, Prof. Dr. Elena Jovanova - Grujovska and Prof. Dr. Maja Jakimovska - Toshikj were exchanged opinions and specific guidelines for cooperation in the field of intellectual property with an emphasis on copyright that was arising from the activities of these important institutions. There were discussed the relationships between the trend of digitization of works in literature and the rights of authors, publishers and financiers (employers). The occasion for the visit was still note that was sent by prof. Filipov on his behalf and on behalf of the Agency Berin, in conjunction with the publication of the new "Orthography of Macedonian literary language."
PS: The enclosed photography was taken in front of a portrait of Krste Petkov Misirkov in the office of the Director prof. Jovanova- Grujovska (left) and in the presence of prof. Jakimovska-Tosic.

The world's five largest IP offices (IP5) have published the IP5 Statistics Report 2021 on the IP5 website. According to the report, in 2021, the IP5 granted 1.5 million patents, an increase of 10% on the previous year, and received 2.9 million patent applications (+3.7%).

The report is an annual compilation of patent statistics published by the European Patent Office (EPO) the Japan Patent Office (JPO), the Korean Intellectual Property Office (KIPO), the China National Intellectual Property Administration (CNIPA) and the United States Patent and Trademark Office (USPTO). The publication includes developments at all five offices, detailed coverage of similarities and differences in their patent grant procedures, as well as comprehensive worldwide data from WIPO and patent offices around the globe.

The IP5 offices have been co-operating since 2007 to improve the efficiency and quality of the global patent system by delivering joint products and services. 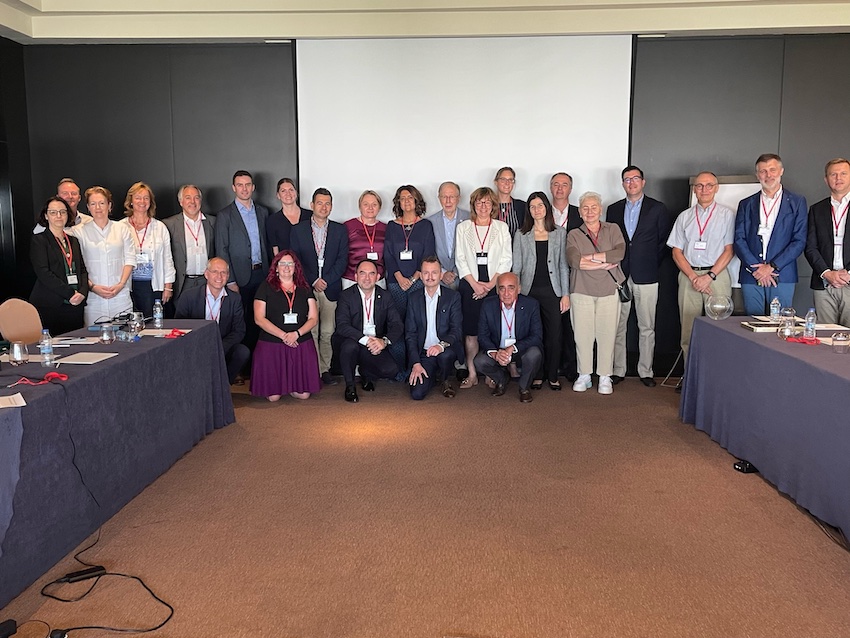 The regular autumn meeting of ANIPA (Association of National Institute of Patent Attorneys) was held in Istanbul on September 17th. Although the Macedonian Association of Patent Attorneys is not a member of ANIPA, this meeting did not pass without a representative from our country. Bogoljub Ilievski from Berin, in the capacity of Vice-President together with President Francis Leider and General Secretary Olga Sirakova constituted the delegation of the European Patent Institute (epi). At the meeting, which was the first physical meeting after the pandemic, reports were first given on the activities of the representatives of the association in the bodies of the European Patent Office (EPO) and the European Union Trademark Office (EUIPO). Delegates from certain countries informed about the latest developments and the expcted changes in Industrial Property laws. Within the framework of the meeting, epi representatives held a series of presentations on the latest developments in EPO. Bogoljub Ilievski, presented and informed about the latest development of events regarding changes to Article 126(2) EPC, quality of products and services provided by the EPO, as well as the newly established Ombuds office service within the EPO. In addition, epi President Francis Leider presented on the latest developments and regarding the Unitary Patent (UP) and the Unitary Patent Court (UPC) which is due to come into force and operate with work in spring 2023. In addition to hard work, ANIPA meetings are also quite social and offer an opportunity for meetings and good company. Accordingly, thanks to colleagues from Turkey (in the role of hosts), this meeting ended with a cruise on the Bosphorus Strait and a wonderful dinner in a fish restaurant. The next meeting of ANIPA is scheduled for the end of April in Bordeaux and will be hosted by the French Association of Patent Attorneys.

Under the slogan "Designing the future" in Copenhagen, Denmark, from 15-th to 18-th of June, 40th annual conference of ECTA was held which and the representative of Berin Vanco Damjanski was one of the attendiies.
After one skipped as well one held under hybrid regime, in the land of advanced Nordic design, over 670 professionals in the field of trademarks, industrial designs and designation of origin, attended this important jubilee conference.
In addition to the regularcommittees meetings and the procedural report on the past working year of the organisation , the conference began with an address by the Director of the Danish Patent and Trademark Office Sune Sorensen and an introduction to current developments in WIPO and EUIPO. Educational sessions followed in which participants had the opportunity to learn about current issues in terms of data protection and usage, alternative approaches to resolving disputes and tips and tricks in protection in the fashion industry.

Additional topics that were covered and discussed at panels and educational sessions included: food and restourant bussines IP protection, as well as, the challenges and  IP considerations in drafting of cooperation contracts and of  the intellectual property rights of startups and spin-off companies in cooperation with academic institutions.
Apart from the educational part, the networking between the colleagues took place at the social events organized in several venues.
Also for the first time special event was introduced for the participants who are attending the conference for the first time in order to get acquainted with the possibility of participation in the work of the organization.
The conference ended with passing of the Presidential Medal, by the current President Mrs. Annette Rasmussen to the new President, o[Mladen Vukmir, which took place in the first European circus building Axeltorv. 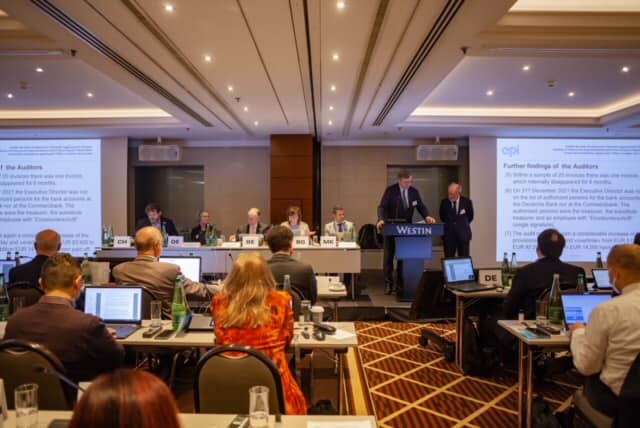 After two and a half years and four video conferences, the council meeting was held this time as a physical meeting in the city of patents Munich (Germany). The meeting was attended by 120 delegates out of a total of 13,500 European patent attorneys from 38 countries, including Marija Kjoseska, Head of the Trademark and Industrial Design Department at BERIN doo and Bogoljub Ilievski, Head of the Patent Office at BERIN doo.
The day before the Council meeting, Bogoljub Ilievski, in his capacity as Vice President of the European Patent Institute (EPI), attended a working meeting and an informal dinner of the Presidium with EPI Executive Director Tatjana Lisak as well as an official meeting of the Presidium members. held the next day.
The work of the Council was preceded by a seminar entitled "Doctrine of Patent Equivalence". The council delegates adopted the reports of the EPI President and Vice-Presidents, the Secretary-General, the Internal Auditors and the Treasurer. Also, the amendments on the with a by-law on elections of members of the working committees of the institute as well as changes in the code of conduct of European patent attorneys proposed by the Committee on Professional Conduct in which Marija Kjoseska participated were adopted with a large majority. The debates continued at the joint dinner of the council delegates, followed by delicious Bavarian specialties, and the representatives from BERIN did not miss the opportunity to strengthen the current cooperation and business ties and open new ones.

On 16.12.21 was held a panel discussion entitled "Intellectual Property Rights (IP) in boosting to trade and investments" within the Conference "CEFTA Week 2021 - 15 years of trade", which took place in Skopje, MK ​from 13-16 December 2021. This panel was addressed by prof. Dr. Gjorgji Filipov, founder of the Agency "Berin"; Mladen Vukmir, MA, Head of the CEFTA IPR Project (Zagreb); Jasmina Suljović, Lawyer (Sarajevo); Ignacio de Medrano Caballero, Head of the Office for International Cooperation, European Intellectual Property Office (EUIPO), (Alicante); Dragana Ranitović, Director of IP, Ministry of Economic Development, (Podgorica) and Marija Božić, Institute of IP, (Belgrade). The discussion was moderated by Aurelia Iseanu from the Secretariat of the Central European Free Trade Agreement (CEFTA) (Brussels). The conference was attended by colleagues: Liljana Filipova, co-founder and European patent attorney of "Berin International GmbH", Vienna; DI Bogoljub Ilievski, head of the Patent Department in "Berin", vice president of the European Patent Institute; M.Sc. Marija of the Sector for Trademarks and Ivona Sekulovska, MA, Representative for IS and about fifty representatives from all CEFTA countries.
The first part of the panel discussed the importance of IPR in encouraging trade in CEFTA and how it can generate economic growth, attract investment and new areas of development. Aurelia Iseanu gave a brief introduction and then asked questions to each of the panelists. Common questions were: 1. Why do we need to take seriously the role of IPR in economic development, trade promotion and investment attraction? and 2. How can we ensure that common rules and minimum standards for the protection and enforcement of IP rights between CEFTA Parties serve the purpose without creating unnecessary costs and potential barriers to trade? How to deal with business concerns that rights acquired in one market do not apply to another CEFTA market?
The representative of MK, Dr. Filipov, was asked a special question: "Recently, the Investment Forum for the Six Chambers of the Western Balkans published a report indicating that IS is ranked among the non-tariff barriers, which are considered an obstacle to do business in the region. “Given that your company offers a range of IP services in the region and beyond, including the EU countries, what do you think is added value for the business if it protects its IP rights while ensuring that no additional barriers to trade are created?"
In the second part of the panel, the discussants initiated a series of questions where Dr. Filipov talked about the not so common, but very unpleasant, situations when some domestic offices for IS or EUIPO when assess whether to recognize a trademark application and register it, instead the provisions of the law, international conventions and agreements use as a criterion for decision the affiliation of the company, which seeks protection in the country before which the Office has been filed or which is in the EU or outside the EU. Filipov also referred to the disputes over geographical names, with EUIPO representative Medrano Caballero responding that such disputes exist between interested companies from the EU itself, which is not unusual, and EUIPO must make a decision if no compromise solution was found between the parties to the dispute.
The moderator, Ms. Iseanu, stressed that the purpose of the Discussion is to discuss the next steps to enhance cooperation on IP rights within CEFTA, possible recommendations, feasible solutions that could be implemented in CEFTA. On this topic, Filipov proposed to consider the possibility of creating a joint "Office for Trademarks and Industrial Designs" for all CEFTA members, following the example of Belgium, Netherlands and Luxembourg. This would eliminate the obstacles and barriers to free trade caused by protectionism in the IP, which, although not a major obstacle, still, according to polls, participates with a 15% share in the total non-tariff barriers.
Having in mind that besides the panel discussion, the European Intellectual Property Office (EUIPO) held a technical workshop for the employees of the CIS offices of the CEFTA member countries, we evaluate CEFTA Week 2021 in North Macedonia as a successful event.